Home / Uncategorised / The Little Engine That Could

The Little Engine That Could 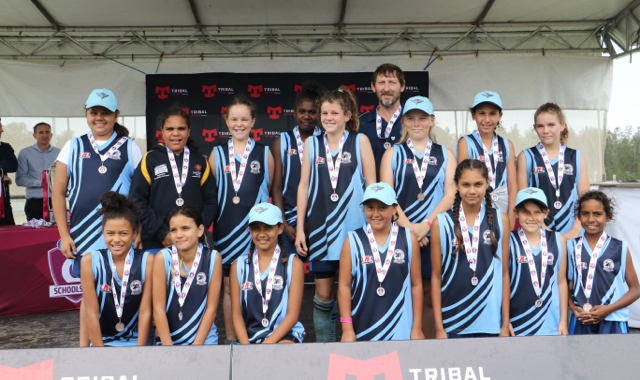 The Little Engine That Could

They came from Gordonvale – a small sugar town to the south of Cairns. A town watched over by the mighty Walsh’s Pyramid and surrounded by the ubiquitous sugar cane that is the lifeblood of the town. Unlike most of the town, however, they play Australian Rules football – AFL to some.

We are talking about the Gordonvale Bombers – a team of 10-12 year old primary school girls who changed the course of their school’s sporting history in one glorious year of commitment, courage, talent and determination. They have firmly placed Gordonvale State School on the AFL map, and much more beyond.

Whilst their achievements are largely measured on their 2017 results, the truth is that these girls started to come together in 2016 when a small group of year five students joined the school footy team for some of their matches in the AFL Queensland Schools Cup and a few other localised school games.

By 2017 they formed the nucleus of a team which would go on a journey not seen in any other team sport at Gordonvale State School in its history. First came their AFL Queensland Schools Cup where they dominated all other teams. On being invited to go on and represent Cairns region at the North Queensland Championships, the girls hopped aboard their bus for two days of travel and one of football. To their delight and also surprise, they won both games and were now entering unchartered waters – competing as one of the final four girls’ primary school teams in the state of Queensland at the AFL Queensland Schools Cup finals on the Sunshine Coast.

Suddenly, they were in rarefied air.

The AFLQ paid for the airfares, meals, accommodation and buses, but there was more needed to get the girls there – like matching outfits! After gaining sponsorships, endorsements and donations, the girls had raised enough to get to play in Maroochydore. Much of the money went on pairs of team shorts and caps that featured the Essendon club’s bomber logo. Now they looked like a footy team. The Essendon Bombers were wonderful in advising how to go about getting the logo onto the girl’s outfits and the Gordonvale Bombers were not just born – they were now dressed to kill.

The “girls from Gordy” arrived in Maroochydore wondering if they could even compete at such a level. A fair doubt to have given the carnival featured schools which were more experienced, wealthier, trained to a higher level with access to arguably better resources and in some cases were already AFL Schools Of Excellence (though not at primary level). It was daunting company and raised plenty of doubts in the travelling parties minds, but at the end of the day the girls discovered that despite the above perceived benefits, at the end of the day it was just 15 girls versus 15 girls – each with equivalent amounts of arms, legs and footy brains…and desire.

Across their two games on the weekend, the Gordonvale Bombers threw everything they had into battle, and charmed whoever they met off the field. In some ways, they became the “darlings” of the event in the eyes of many. But they were not there for sheer fun – they wanted to prove that they deserved to be at this level of school competition. The ensuing results certainly proved that.

First up a narrow nine-point loss to local Sunshine Coast school, St Thomas Moore College. The scores remained close – less than a goal in it – right up until the end when the Saints downed the heartbroken Bombers with a late goal. For the second game of the series against Brisbane school St Edwards, the same series of events unfolded – a late goal, just moments from the end of the game – turned a two-point deficit into an eight-point loss.

Yes, the game is about fun and participating, but that doesn’t mean you don’t feel heartbreak when you know you came so close to winning – twice. They might not have won a game for the tournament, but realistically the were only a couple of goals away from best in state. That isn’t much in footy.

The girls travelled down to Maroochydore knowing that the worst that could happen was to finish fourth in the state. That is exactly what happened in the brutal light of statistics. But the reality is that those two narrow defeats proved conclusively that the Gordonvale Bombers deserved to be in that company. However, more than that, the girls grew as young women in a bigger world. They made friendships that might last forever. They saw and learned things that they might never have otherwise experienced had it not been for footy.

They also learned how a community could come together around them and make dreams happen: School P & C, sponsors, parents, the school teaching community and many more people working together to create something memorable. Whilst it is true that the girls put their bodies on the line to compete in the actual games – bruises and all – they could never have had that opportunity without the assistance of many.

Gordonvale State School and the wider town and district came together and stood beside them.

Nobody can predict whether another team will one day better their performances this year. Inevitably, one day someone will. Nevertheless, until then, the Gordonvale Bombers stand as living proof that a talented and committed group of girls can make dreams happen on a football field. They really were the little engine that could. They might not have directly used the “I think I can” or “I thought I could” language, but they shard that little engines determination and belief. That little engine’s never say die attitude.

And in the process they won hearts, won respect and won admiration.

That is way, way better than winning a footy match.