Crocs have to fight hard for fifth flag in six years 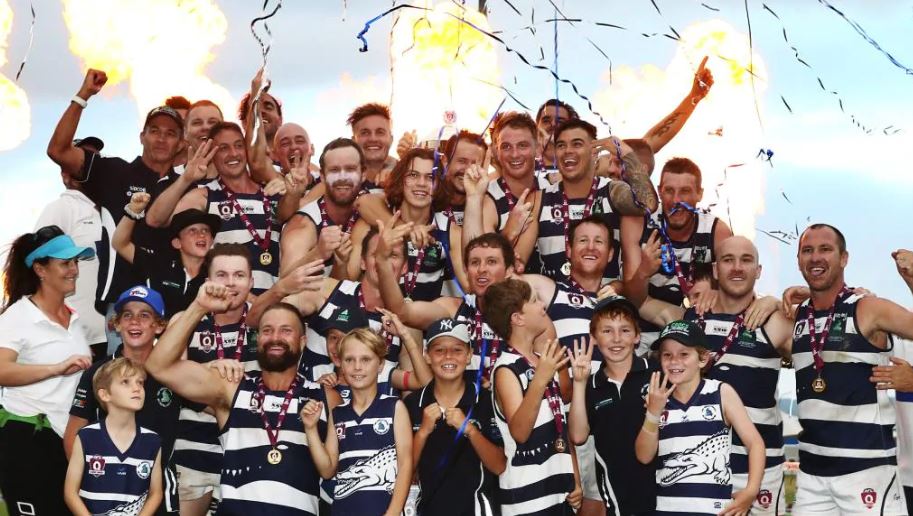 Crocs have to fight hard for fifth flag in six years

Port Douglas lifted their fourth straight premiership on Saturday evening at Cazalys Stadium, just the second club ever to do so, as the Crocs have now won five of the last six flags.

The kid from the housing commission area in Victoria who first came to Cairns as a rugged on-baller, might have just become the finest contributor AFL Cairns has seen.

Port Douglas lifted their fourth straight premiership on Saturday evening at Cazalys Stadium, just the second club to do so, as the Crocs have now won five of the last six flags.

And, while there has been a handful of remaining players in all those premiership teams, one component has stayed a constant throughout — coach Brad Cooper.

Premierships are won by football sides, the 22 blokes who are selected, the coaching group, the emergencies that missed out, the support staff, but at Port Douglas, it is Cooper who helps keep them all together.

And, he probably recruited them to the club, in the first place.

His record as arguably the greatest contributor to the competition continues to grow, winning a premiership as a player in 2005, before now coaching five of the last six.

AFL Cairns’ records available are not that detailed but six premierships, five as a coach and one as a player, would go close to the greatest achievement as an individual.

He is the longest-serving coach in the Far North and a couple of seasons ago was recognised as the best coach of the sport in the state of Queensland.

As a long-time AFL Cairns footballer and follower noted this week: “No one’s had the influence on the competition that Coops has had.

“In terms of record, he is our Norm Smith in that he won multiple flags as a gun player, then did it as a coach.”

The Norm Smith of the Far North — not a bad title that.

Cooper’s winning record speaks for itself but the achievements have not happened by accident.

When his Crocs won through to the grand final a fortnight ago, instead of sitting in the change rooms and having a beer with his players, he was straight into the Cazalys stand with a pen and notepad to examine the other semi-final.

“He is not the most popular person going around as a coach, but sometimes you cannot be popular to be a good coach,” Lea said.

“He is extremely thorough, he has an eye for detail.

“It is not about a football match on a Saturday afternoon, it is about helping put a roof over someone’s head when they move to town, helping source them a job.

“As far as we are concerned as a committee, he can have this job as the coach of our club for as long as he likes.”

When reminded of his growing AFL Cairns resume, Cooper praised the club’s volunteers for allowing him to do his role.

In the game itself on Saturday, the premiership was the Crocs’ hardest fought of the handful of recent flags.

The end scoreline against South Cairns would show a Port victory with some ease but for three-and-a-bit quarters of the game, they had to fight tooth and nail for everything they got.

Experienced trio Adam Boone, Wes Glass and Daniel Moore settled the ship when the Cutters were pressing their hardest.

South Cairns took a lead into the final change before, with the wind, Port Douglas kicked away in the final term.

A Daniel Davidson goal from an angle sealed the result.

The Cazalys Stadium breeze in September is always a popular topic of conversation and it was at its best in 2019.

With the wind, South Cairns took back the lead late in the third term, following two Tristan Keilar majors, but it should have been much healthier if they wanted to hold off Port in the last.

The Crocs took control in the final term when the game was on the line, kicking seven goals to one to confirm another flag for their dynasty.

With Port Douglas securing their fourth straight AFL Cairns premiership, there are only a select few Crocs who have been in the side throughout the entire dynasty: Kye Chapple, Jordan Chapman, Josh Lea, Dylan Wearmouth, Brett Mckeown, Wes Glass and Peter Bury. Brad Cooper has been at the helm in every year also.