AFL Media Release: AFL Returns to Cairns for a Seventh Season in 2017! 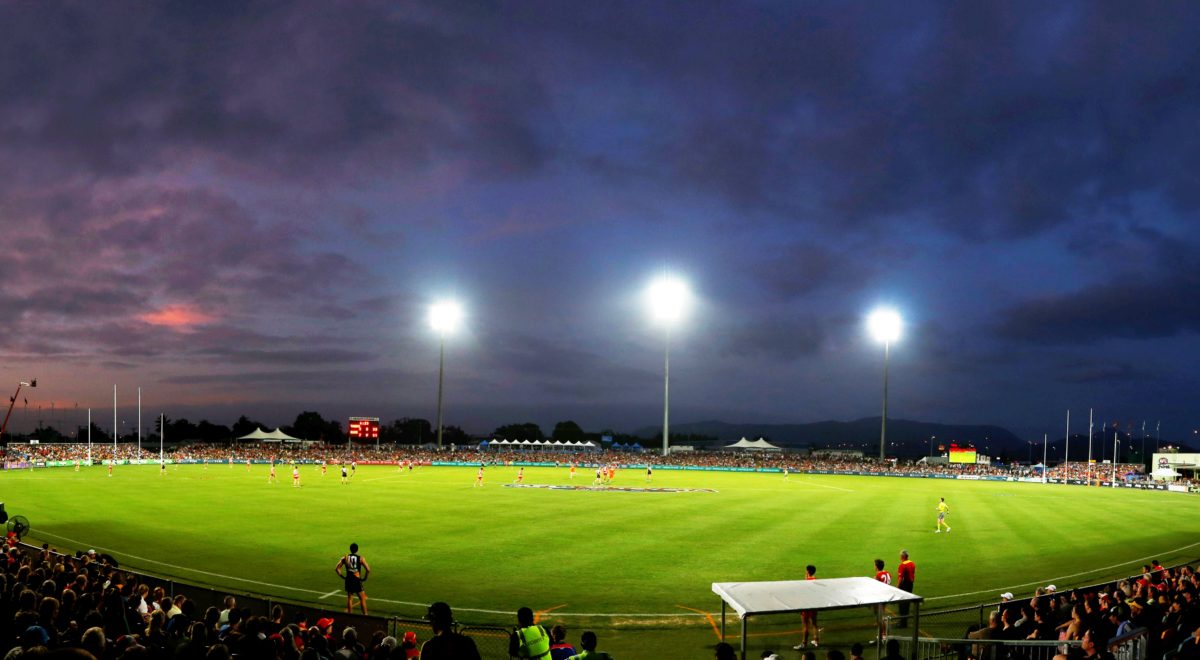 AFL Media Release: AFL Returns to Cairns for a Seventh Season in 2017!

The AFL announced today that Cazalys Stadium in Cairns will see its seventh straight Toyota AFL Premiership Season match happen as part of the 2017 season.

The match, to be held in Round 18 of the Toyota AFL Premiership Season, will see the reigning Premiers the Western Bulldogs host the Gold Coast SUNS on Saturday July 22.

Returning to the twilight timeslot with a bounce time of 4.35pm locally, AFL General Manager Clubs and AFL Operations, Travis Auld, said the love of AFL in North Queensland has been evident for the past six seasons in those who have attended the premiership season matches.

“North Queensland fans are passionate supporters of Australian Football, that’s seen through the participation numbers and the AFL talent the region has produced through the likes of Charlie Dixon, Jarrod Harbrow and Zac Smith,” Mr Auld said.

“It’s important to the growth of the game that regions, such as North Queensland, have access to the elite competition and see the superstars up close.

“It will be an exciting time for the North Queensland community as they will get the opportunity to celebrate the Western Bulldogs 2016 Premiership success.

“The week leading into the match also provides AFL Cairns with a platform to engage the wider community through a series of events such as coaching sessions with presentations by AFL coaches, NAB AFL Auskick and junior football clinics for kids of all ages.

“As in previous years, the AFL has worked closely with the Queensland Government, through Tourism and Events Queensland, Cairns Regional Council and AFL Cairns to secure the city the Premiership match and once again we thank them for their continued support,” he said.

Treasurer, Minister for Sport, and Member for Mulgrave, Curtis Pitt, also welcomed the news. “As someone calling the Far North home I am always pleased when we get to see and enjoy these type of world-class events,” Mr Pitt said.

“This has become a fixture on our region’s sporing calendar and I hope we can continue to look forward to more of the same in the future.”

Cairns Regional Council Mayor, Bob Manning said the return of the Western Bulldogs and Gold Coast SUNS to Cairns for the seventh year was testament to the city’s growing reputation in hosting high profile sporting events.

“Major events such as this play an important role in promoting Cairns on a national stage, supporting our tourism sector, supporting jobs and fostering community pride,” Cr Manning said.

“Since we last saw the Bulldogs, they’ve gone on to win a long-awaited premiership. So this  really will be our chance to see the cream of AFL talent right here in Cairns.

“As a Council, we invest many millions of dollars into grassroots sporting facilities every year to give every child the opportunity to play sport. This match will continue to give these young people the chance to see their heroes up close and hopefully will inspire the next generation of players to chase their dreams.”

Western Bulldogs CEO Gary Kent said the relationship built with the North Queensland community would continue to grow for into a fourth season.

“We are pleased to return to Cairns for the fourth consecutive year, for what has become a much-anticipated match in our fixture,” Mr Kent said.

“Our players, staff and coaches have built a great connection with the Cairns community, and we look forward to strengthening that relationship again in 2017.

“Our fans have shown great support for this match in the past, and we hope to see that continue next season,” he said.

“AFL football in Far North Queensland continues to grow and this year’s game in Cairns is going to be the biggest yet, as we take on the reigning premiers,” Mr Travis said.

“As a club we have established significant support in Cairns and enjoy playing our role in developing AFL throughout the region, which is also a key recruitment catchment for the Gold Coast SUNS Talent Academy.

“The Gold Coast Football Club will continue to support the growth of AFL in Far North Queensland, we have done this in the past, through community camps, pre-season games and AFL premiership fixtures and our presence will grow in the future,” he said.

AFL Cairns, the affiliate league who run the local community competitions, also own and manage the Cazalys Stadium venue.

“It’s a testament to those fans locally whose love for the game has influenced the return of top-flight football.”

This will be the seventh Toyota AFL Premiership Season match to be played in the Tropical North and the fourth time the Western Bulldogs have played an AFL match in Cairns.

A limited number of corporate hospitality opportunities will be available and for further information please contact AFL Cairns on 07 4042 3000.