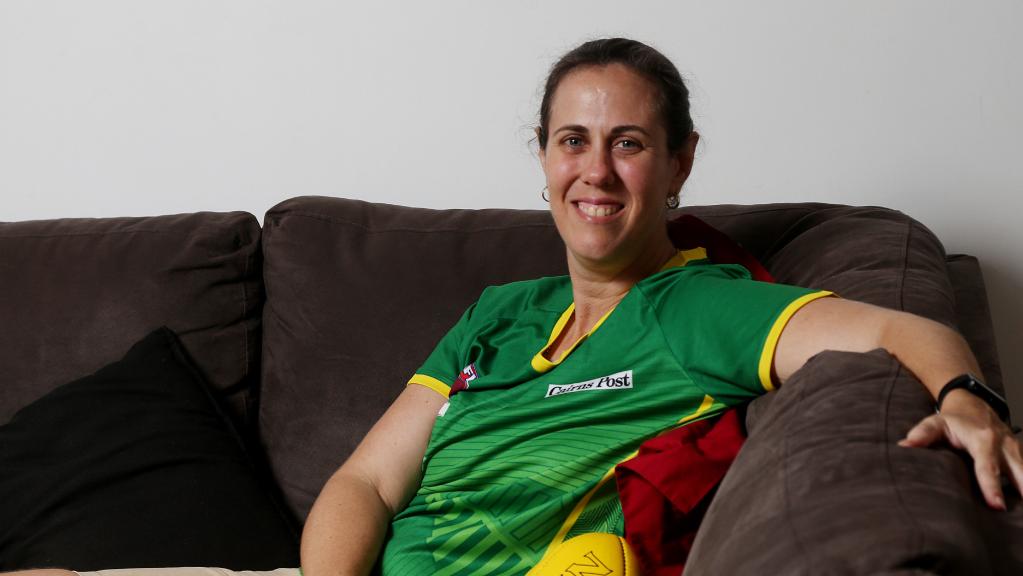 JO Butland was an Australian Matildas Goalkeeper and All Australian Ruck in Aussie rules before the games went professional. Following her playing career, Butland has helped shape the next generation of Far North sports stars. She speaks to Jordan Gerrans about all things round ball and Sherrin.

How do you reflect on your career these days? Being a dual international (soccer and Australian rules football) is not something that many people can say they have achieved.

I have been extremely lucky to have had the opportunities to play for my country, especially coming from a small country town. Both sports have allowed me to see the world and experience many different cultures, something that I may not have been able to do. This has been a great achievement but it has also taught me to be resilient as it wasn’t an easy path to travel, but that is what is so satisfying about my career.

What are your memories of the old women’s NSL days?

The national competition back when I played was based on the state academies and it was always very competitive between Queensland and NSW. There wasn’t much player movement between states as we weren’t paid. It was great though to be part of a national competition that was progressing the professionalism of our sport at the time.

Take us back to your four caps for Australia in soccer. It must have been such a proud moment for yourself and your family to represent the country?

All four games that I played for Australia hold great memories for me as it took a lot of time sitting on the bench in the Australian team to achieve them. My first game was one of the first televised games for women’s football or soccer back then. We played Italy and I was lucky enough that my mum and dad could be in Sydney to watch. Two of the other games went to penalty shootouts and we won both of those games after I made a couple of saves.

What are your thoughts on the game these days? The W-League just seems to get stronger and stronger every year?

The W-League has certainly allowed for the elite development of players and that has reflected in the results in recent years of the Australian Matildas. It is great to see that players can progress from their state talent systems into the W-League at that level.

Do you sometimes wish you were born 15 or so years later? You could have had a professional career in AFL or soccer.

I try not to think about it like that but rather take great pride in knowing that I was a part of the journey that saw the national competitions set up, especially with the involvement as a coach and manager in both sports for representative teams.

I was told the other day you were considering a playing comeback. Is that something we can look forward to?

That is a little ongoing joke that AFLQ regional manager Kieran Daley started. I am enjoying what I am doing now so, no.

What about the best players you have played with, with some playing in AFLCW — Chelsea Randall (Adelaide), Tiarna Enrst (Western Bulldogs) — last season?

Daisy Pearce, who plays at Melbourne, has to be one of the most talented players I have played with and against. She always seemed to have so much time and her knowledge of the game is unbelievable. Locally, some of our talented youngsters have been great to be on the field with. Bre Koenen, Luana Healey, Elisha King and Selina Goodman come to mind.

You have coached with the Brisbane Lions and Gold Coast Suns previously. Is an assistant coach’s role something you would like to take up on a full-time basis?

I have been very lucky to have the opportunities to coach at a senior representative level and certainly enjoy the challenges that come with it. If the right opportunity presented itself I would have to consider it but I am very happy in my job and it represents different challenges each year just like coaching does.

Being based in Cairns, you must have been very proud to see the four girls with links to the Far North playing in the first season.

Yes, I was. To see our homegrown talent playing in a professional competition was a very proud moment. Some of my proudest achievements in sport have come from seeing the players I have coached and mentored achieve their dreams. It is very important to give back to the game and pass on my knowledge. These girls are taking that into their games now.

Are there a few from that team you think can step up on to an AFL list in the coming seasons?

I would think that right now we would be looking at our younger players to be the ones that have the best opportunities. The likes of Kitara Farrar and Poppy Boltz, who are already in the Gold Coast Suns Academy and part of the U18 State team and are very talented athletes. Unfortunately I believe right now these girls at some stage will have to move away from Cairns to achieve their goals.

How can we really develop the latent talent and attract quality athletes to AFL?

Now that the pathways are there and athletes can see that they can potentially earn a living playing AFL, they are more willing to put in the extra work to achieve their goal. Locally, we need to continue to find avenues for representative games so that our players have the opportunities to step up and play at higher level.

Who do you think are the best players you have coached?

I am lucky enough to have coached a lot of players that played in the inaugural AFLW. For me though, the couple of local players in Selina Goodman and Breanna Koenen are two that are special. Selina had never played footy before and was an athlete so we had to work hard at her skills and game understanding. Breanna I coached since she was 14 and was just a natural talent that was willing to learn. They made coaching enjoyable.

I know you watched every second of the first AFLW season. How can the game continue to grow over the next period?

The AFL have been quite smart in their marketing of the AFLW and that has helped increase the playing numbers across the country. The talent pathways have also been refined. This will help with the overall talent that will progress into the AFLW. We are seeing each year the crop of U18 talent getting better, so the expansion of the league in stages is the only way the AFL could do it successfully. It will be great to see new teams in the AFLW competition in 2018 and locally the fact the Gold Coast Suns put in a bid is great. They have been very supportive of the female part of the game and have invested greatly this year in the female talent program. This is certainly the way forward.

Can you tell us a little bit about your role with Peninsula School Sport?

I work with Peninsula School Sport and we co-ordinate the representative school sport program for our region (from Cardwell west to Croydon and north to the Torres Strait). We also co-ordinate state and national championships for different sports each year that are held at venues around our region and also help provide different professional development opportunities for the teachers in our region. We also send away approximately 50 teams across approximately 20 different sports. I was lucky enough when I was young to go through this pathway and it was a great experience and opportunity.

The local AFL Cairns women’s competition has been absorbed by AFL Cairns this season instead of running alone. Do you think that is a positive for the game in the Far North?

Yes, I think it is a great move forward. We are at the stage of needing our sport to look and feel more professional and the added support and structures that AFL Cairns can offer will allow that to happen. It was the logical step forward for the league and AFL Cairns, AFL Cairns Womens and the clubs have to be congratulated on making this happen.

You coached the Cairns representative side against Townsville earlier this season. How does the current crop of players compare to years past?

We are seeing some good young talent come through from Youth girls so the current crop are more refined in their skills and have a better understanding of the game. We have had a few girls head to Brisbane in the past 12 months so that has slightly weakened some clubs here

AFL Cairns league best and fairest four times in five years from 2003 to 2008.

In 2006, Butland was part of the first Australian women’s international rules football team to tour Ireland.