Home / Uncategorised / Pride of Lions on show for milestone

Pride of Lions on show for milestone 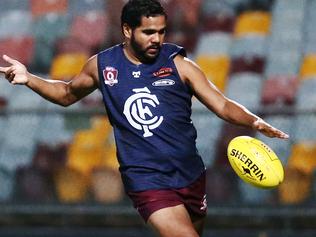 Pride of Lions on show for milestone

They came from as far and wide as Melbourne and Perth to be back in the Far North to celebrate City Lions’ 50th anniversary.

The two men’s teams brought up victories on Friday evening at Cazalys Stadium against North Cairns while the first-year Lions ladies team fell just short of making it a club treble, against the premiership favourites.

Lions president Shane Law said it was a special occasion to remember the club’s proud history.

“It has been a great weekend for the club; we had guys come from Perth, Victoria and everywhere else to be here for the anniversary,” Law said.

“The senior boys played well and coach Aaron Davey was pretty happy with the way they stuck to their game plan. CELEBRATIONS: Lions players congratulate each other on another goal in the AFL Cairns match between the Cairns City Lions and the North Cairns Tigers at Cazalys Stadium, Westcourt. Picture: BRENDAN RADKE.

“It would have been great to have all three teams win on the night but the girls played the top team and played fantastic and were very unlucky not to win.”

Northern Territory recruit Davin Ferreira kicked four goals from the middle of the ground and was awarded the Phil Jose-Syd Fatnowna heritage medal for best-on-ground in the seniors game.

Jose and Fatnowna are the only players to have played more than 300 games for Lions and are both life members.

Jose a was member of both Lions’ premiership teams in 1982 and ’83, while Fatnowna was a former captain and coach.