The sudden death of a close mate has inspired Cairns ­Ironman Jevaat Ali to compete again after a nightmare run of injuries that shattered his body and left him questioning whether he had lost the will to race.

The pair had been training intensely in the months prior to the Cairns event when Ali flipped his bike coming down a hill, leaving him with multiple fractures and head injuries.

“I had a terrible concussion. I think I took about a week off work and obviously couldn’t race,” Ali said.

“I popped my collarbone. It’s still out at the moment and causes me a bit of grief.”

But in hindsight the horror prang may have been a ­blessing.

“(It meant) I was able to spend the whole day with Ryan last year at Cairns ­Ironman which was special in retrospect,” Ali, 36, said.

“I think a lot of doing well here in Cairns has to do with that and paying homage to him. Yeah, he’s definitely a big part of it.”

The personal trainer’s ­commitment was tested again when Ali crashed earlier this month.

“A dog ran out in front of me. I tried to swerve and fell off again going about 40km/h,” he said. “I remember thinking, ‘not again’. The bike was a write-off but I was pretty ­determined to make sure I could have another crack.

“I’ve had a couple of bad spills. Thank God this time nothing was broken.” 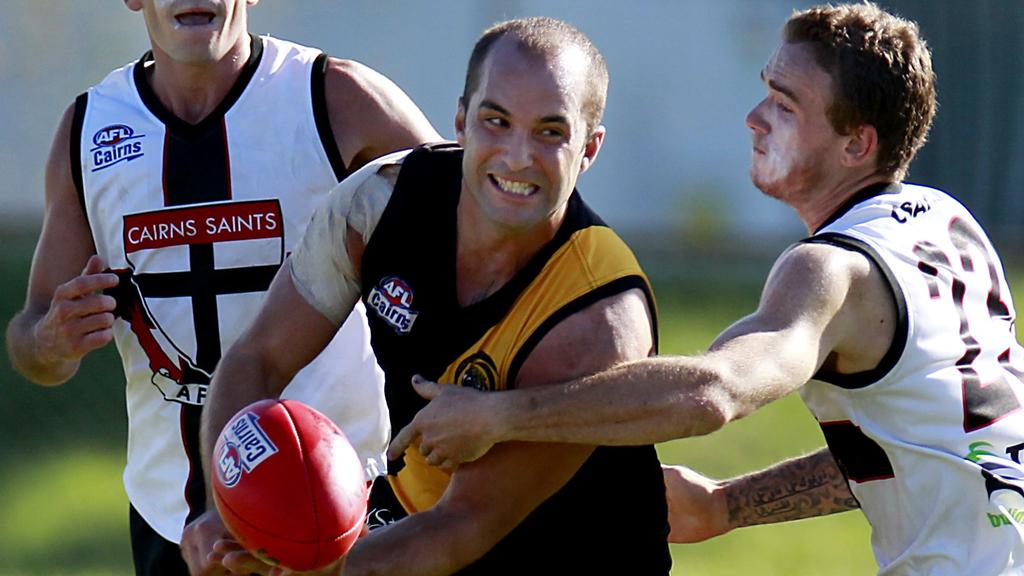 A proud Far North ­Queenslander who moved to Melbourne in 2013, Ali made a name for himself as a dour defender in the AFL Cairns competition.

“I think he just wants to go too hard too soon sometimes,” Coppock said. “It’s definitely a positive. To be stubborn and be able to push through can definitely help you on race day. But it also means you need to be told to stop sometimes.”

Knowing when to stop has propelled Ali to new heights, completing 350km on the bike, 105km of running and 11km in the water last week. The hope is the extra workload, reached by pacing himself better, will help him achieve his dream of qualifying in his age group for the Ironman World Championship in Kona, Hawaii later this year.

“If I qualify I’d be ecstatic but you can’t put that kind of pressure on yourself,” Ali said. “Ironman is all about control. You can’t come out too hard. I know I’ve got to be disciplined.

“I’d be really happy with anything under 10 hours.”