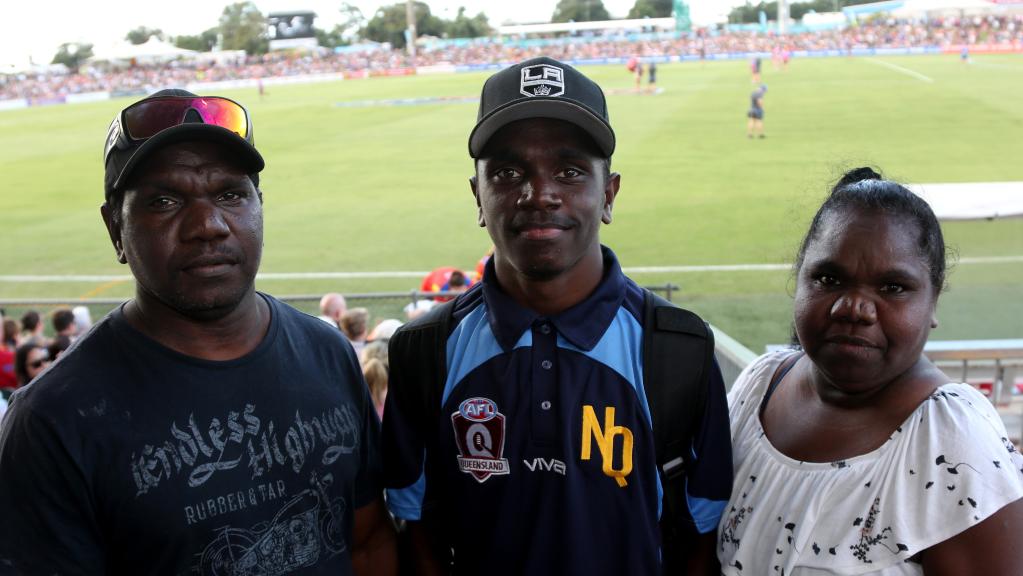 A long journey from a remote Western Cape York community wasn’t going to stop Fitzroy Lawrence seeing his son star in an AFL representative match in Cairns at the weekend.

The Kowanyama-based ranger, along with extended family, drove more than 700km to see his son, Fitzroy Greenwool, play for North Queensland in their match against South Queensland. Greenwool, 17, kicked three goals and was one of the North’s best players in a disappointing five-goal loss to a strong southern squad. Lawrence said seeing his teenage namesake perform at Cazalys Stadium in a curtain raiser for the Gold Coast Suns and Western Bulldogs clash on Saturday was a special experience. “We’re all really proud of him,” Lawrence said. “My sisters, nieces and nephews, Fitzy’s uncle on his mum’s side — we’re all here — and Fitzy’s grandfather. It’s great.” “When he kicked that (first goal) I think I was screaming the loudest, yelling ‘Go Fitzy’.” Greenwool is a member of the Gold Coast Suns talent academy and his father recognised his talent from an early age. “Mainly I played rugby league but just seeing Fitzroy from a very small age kicking the ball left and right foot (well), I thought then that maybe he could go ahead and play AFL,” Lawrence said. Listed at 170cm and 55kg, Greenwool is just 3cm taller than the shortest player in the AFL, the Western Bulldogs’ Caleb Daniel.

But Lawrence said “Junior” was used to breaking the mould. “This was his first representative game against adults which is special for us,” he said. “He was the youngest and smallest … on the field today.”