Cairns star Jack Bowes will remain on Queensland soil, taken by the Gold Coast Suns in the first round of the AFL’s national draft on Friday night.

The Sydney Swans placed a bid to select Bowes with pick 10 but Gold Coast matched the bid to keep the Suns Academy player on the glitter strip in 2017.

Bowes is the first Queenslander to be picked in the top 10 of the draft since St Kilda’s David Armitage in 2006.

Just five Queenslanders have been taken in the top 10 in the last thirty years – with Bowes’ the only player to hail from tropical north Queensland.

An elated Bowes says he’s ready to join the likes of Garry Ablett in the Suns midfield next year.

“I’m over the moon at the moment. I just can’t wait to get started,”  says.

“I’d like to think this is only the start for boys from Cairns to come down,” Bowes says.

“The talent is there. They’re all getting identified now more than anything. There’s a career pathway and you can come through the Suns academy, so it’s all coming together.

“I still really look up to Jarrod Harbrow and [Port Adelaide forward] Charlie Dixon – guys who’ve come from Cairns and made it happen for themselves.” 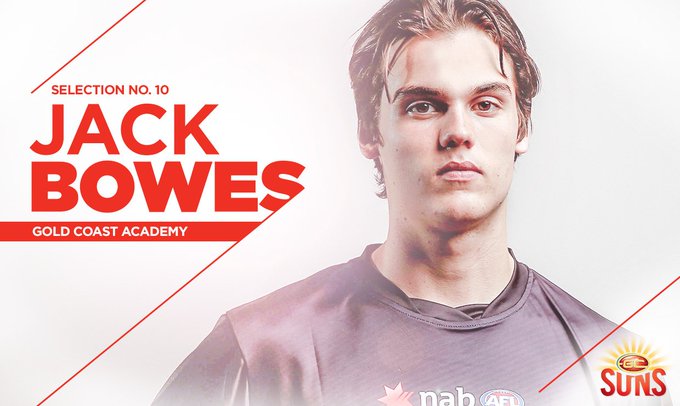 Bowes’ beaming parents took in the draft in Sydney alongside their son.

But the teenage phenom says the family kept their emotions in check.

“We’ve been through the whole leaving the nest thing a few years ago when I moved to the Gold Coast so I think she was just proud more than anything.

“There may have been a few tears but they did a good job hiding it.”

Suns list manager Scott Clayton told the club’s website the 188-centimetre midfielder had made sacrifices to get to the big league.

“It’s such a good story and a great investment by his family and us. I mean to move from Cairns, you really need to get to a talent hotbed and he’s done that,” Clayton says.

“He’s sacrificed a lot. His parents and other family members are very supportive and now to be officially a Gold Coast Sun.

“I’m hoping he gets a call up in the rookie draft on Monday,” Bowes says.