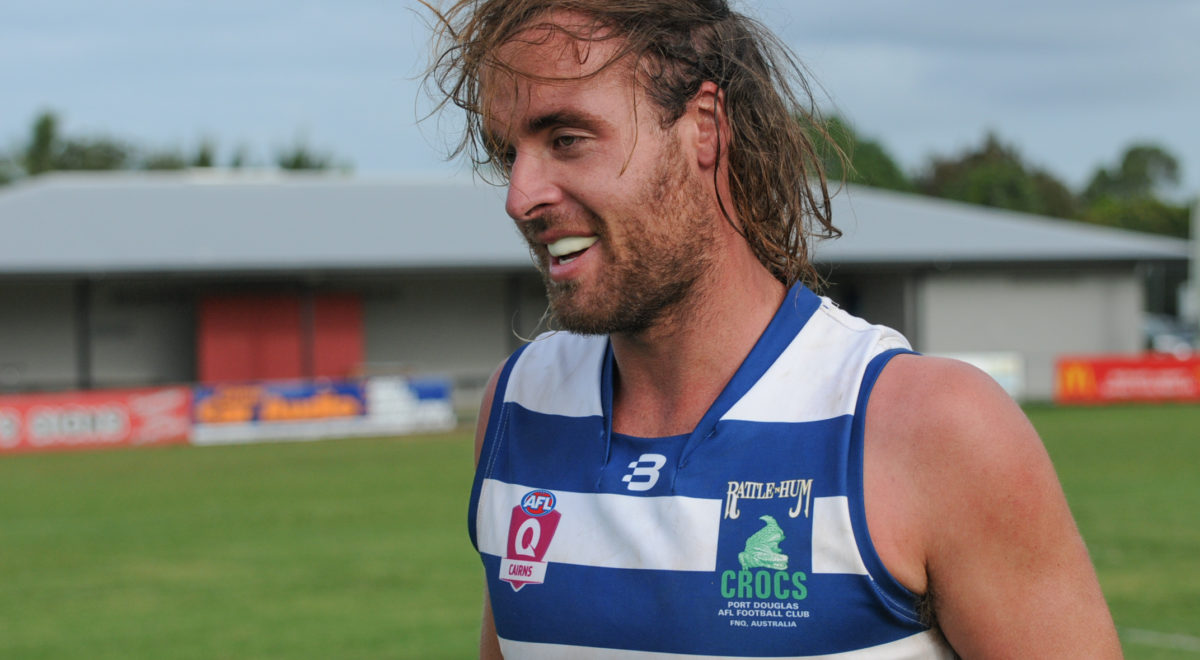 The laconic skipper kicked his much anticipated 100th goal in the third quarter of Crocs’ convincing win against Centrals Trinity Beach Bulldogs at Crathern Oval on Saturday afternoon.

It’s the second consecutive season Chapple has kicked more than a century, having booted 113 majors in the AFL Cairns competition in 2015.

But rather than being rewarded with a post-game beer, Chapple says he’ll be digging deep into his wallet at the request of his parched teammates.

“Most of the boys have already come up and told me it’s definitely my shout,” he says.

Coach Brad Cooper, the man who shifted Chapple from the midfield to deep in the Crocs’ forward line last season, says he’s entitled to a drink from the bullocking big man too.

“I certainly would have thought so,” Cooper says.

Supporters stormed the field to congratulate Chapple who smirked as a routine set shot sailed through the posts in gusty conditions.

Rather than relishing the spotlight, the softly spoken full-forward says he was simply glad ‘to get it out of the way’ as the ladder-leading Crocs set their sights on premiership glory this September.

“There’s been a bit of media about it,” Chapple says. “After we got it over and done with, we kicked a few goals. So maybe it helped.”

Starting the game with a tally of 98 goals, Chapple struggled early, kicking 1.3 in the first half.

“The wind was swaying my shots at goal,” he says.

But the Crocs finished strongly, supplying their forward with plenty of opportunities late as the big man finished the match with six goals despite some quality defence from Bulldogs backman Ryan Lempa.

“They’ve got a terrific list and are well coached,” Cooper says.

“If they didn’t have some injuries in the third quarter they would have pushed us more.”