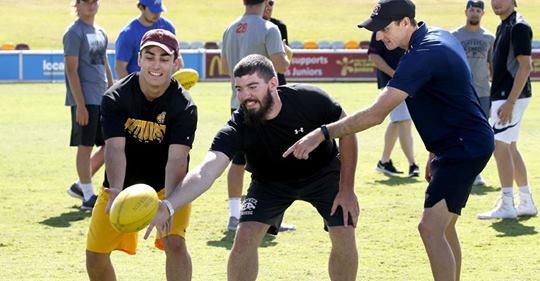 A TEAM of American lacrosse players might have a new favourite sport after getting the chance to try a game of footy down-under.

The 13 players visited Cairns as part of a Lacrosse tour of Australia, stopping over in the Far North for some R & R in between bouts against Australian lacrosse teams in Sydney and Melbourne.

While in Cairns, the players took part in an AFL clinic at Cazalys Staidum.

Despite most of the college-age Americans having never even heard of AFL before, many of them got hooked on it,

Austin “AJ” Nejia from Washington DC said playing AFL felt like it was involving skills from a lot of different sports.

“It’s very different to NFL, it’s more free-flowing; I’d like to be able to watch a full game of it.”

Horizons Group Travel tour co-ordinator Adam Taylor said many of the guys were looking up AFL clips on their phones at lunch time.

The players also got to see Aussie wildlife at Kuranda Wildlife Park and take a trip out to Green Island before setting off for Melbourne today.