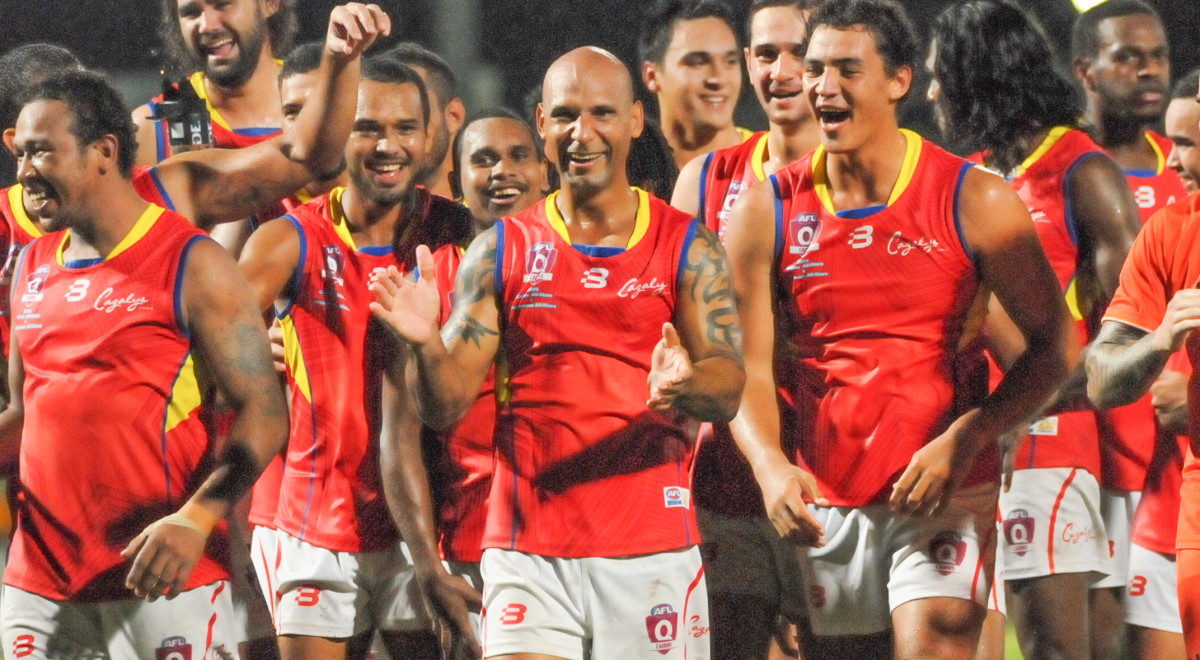 The Indigenous/South Pacific boys made it two wins in a row (2015 & 2016) and now lead the series, 2-1 (Cairns All Stars won the inaugural year, 2014) after a 14 point victory in wet and trying conditions at Cazalys Stadium on Friday Night.

See below the Final Teams for last Friday Night:

As for the Captains and Coaching Staff of both Teams:

This team was coached by Manunda Hawks Coach, Marc Harbrow with assistance from Gavin Ham as well as Tiger, Kim Tennick fulfilling the Team Managers Role.

You would be forgiven if you arrived to Cazalys Stadium last Friday Night disappointed. Disappointed in the weather, nothing else. Despite a day of rain making the surface very wet, the game was another close contest. Despite having the biggest winning margin of 14 points since the All Stars concept began in 2014, it was the tightest game to date. With minutes to go, it was still either sides game for the taking, but two quick goals in the final three minutes saw the margin extend.

In the same way he finished the 1st, Adam Gross started the 2nd, kicking his 2nd to lift the Cairns outfit. Club teammate, Aaron McNab goaled at the midway point of the 2nd to see the Cairns All Stars hit the front for the 1st time, by 1 point. Youngster, Timakoi Bowie kicked his 2nd for the game with only minutes to go before ½ time. Lowah’s goal saw the Indigenous/South Pacific lead by 6 points (1/2 Time: Cairns All Stars 4.2-26 vs. Indigenous/South Pacific All Stars 5.2-32).

Despite the terrible conditions throughout the day, the 1st half saw little rain, but after the main break the rain started to pour again. This took the pace out of the game and bought into the contest the in and under players. Despite the rain, no player from either team held back. All players went as hard as they could. Cairns All Stars livewire in Adam Gross bagged his 3rd of the game early in the term, with McNab kicking his 2nd for the Cairns side to hit the front. Swingman for the Indigenous/South Pacific Dwayne Bosen kicked his sides 6th with only minutes to go before the siren to edge 1 point clear heading into the final change (3/4 Time: Cairns All Stars 6.4-40 vs. Indigenous/South Pacific All Stars 6.5-41).

Once again, congratulations, well done & thank you to everyone that was involved, supported and assisted the AFL Cairns All Stars Representative Program. It was a success and something that AFL Cairns will continue to grow in years to come.

As you are all aware, the All Stars match aids selection for the NQ Representative team, who will take on SQ as a curtain raiser to the Round 17 AFL Toyota Premiership Match between Western Bulldogs vs. Gold Coast SUNS on Saturday, 16th July 2016 at Cazalys Stadium. Again, we hope that Cairns will make up a large percentage of the team (previous years Cairns have had 15-18 Players of the 23-man team). NQ will be made up of players from AFL Cairns, AFL Townsville, AFL Mackay, AFL Mt Isa and AFL Capricornia.

As previously announced, one of Queensland’s most respected coaches, AFL Cape York Regional Manager Rick Hanlon will take the reins of the North Queensland team. In the coming week, AFL Cairns will put together a Cairns based contingent for the NQ squad.